Plants go in and out of fashion but the weight of scorn falls heaviest on those plants which march on through the decades, successful and healthy, in barely tended gardens. Who has not curled their lip at the shiny yellow-splashed leaf of aucuba japonica; winced at the custard-coloured double blooms of kerria japonica or recoiled from the immaculate conifer-girdled lawn of the 1970’s detached house?

As a garden renovator, I’d like to make a case for these stalwarts, which you may well find in your garden, and revamp their image through planting combinations and pruning.

This border, belonging to Alexandra Campbell who writes the gardening blog, The Middle-sized Garden, is an excellent example of re-evaluating the plants in your garden with a fresh and unprejudiced eye. 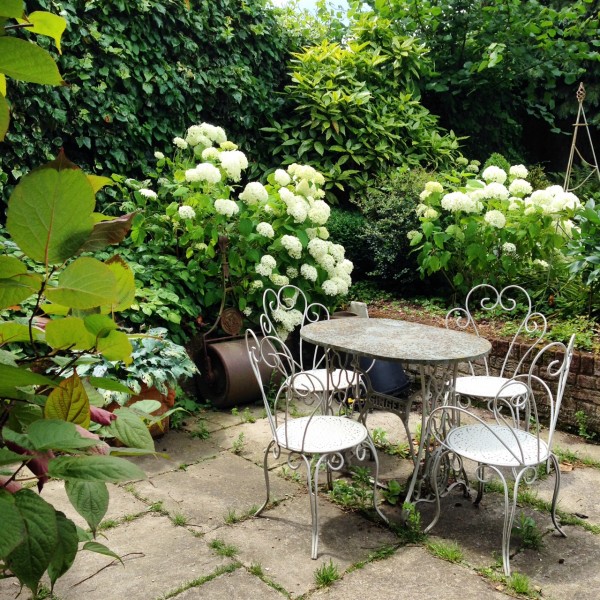 Unfashionable aucuba has been partnered with shock-headed Annabelle hydrangeas to create a cream and green gleam in a dark corner.

Alexandra inherited an aucuba japonica on a shady north-facing wall. Instead of tearing out with her teeth such a commonplace shrub, she cut it back and created the perfect backdrop for the rather more fashionable Annabelle hydrangea. Many evergreens – ivy, bay, yew – can be so dark and light-absorbing that they would all but vanish in this position. Aucuba with its bright yellow and green leaves shines out and picks up the lime tints in the young flowers of Annabelle.

Aucuba is a strong grower when established so keep it in bounds by pruning in the spring and use secateurs to cut stems not leaves.

I confess that I had nothing but the deepest disdain for kerria japonica. Visit any neglected garden in Spring and you will invariably see those golden-yellow buttons blazing away – they just won’t accept the party’s over. Even worse, see kerria hacked into a hedge, its chopped stems sprouting at angles. Horror!

Clearing an area of shrubbery at the 12th Century Priory (crushed beneath a cherry which had itself collapsed under the weight of a long-unrestrained and particularly rampant Rambling Rector rose), I came across the inevitable kerria. 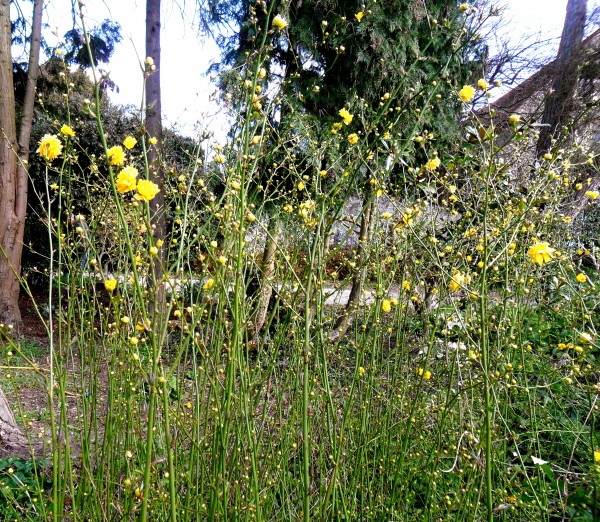 With the oppressive Rambling Rector now toeing the line, the kerria stems shot upwards and small golden buds appeared. I came to the idea of taking advantage of kerria’s suckering nature and using it as a transparent  screen.

The key to making kerria work is to remove old and wayward stems at the base to keep branching at bay. Leave upright and young growth to flower and create the effect of a swaying, transparent and glittering veil.

Such is the efficiency of conifers that one quite frequently passes a 1970’s garden which has changed little since it was planted and is actually as cool and retro as a brown Aston Martin. However, this ease of maintenance and year-round presence led conifers to become the horticultural version of the drip-dry shirt. And the mood changed and we all wanted crumpled linen and seasonal herbaceous splendour and decline.

These days we are learning to plant conifers as part of a mixed planting scheme rather than en masse. In the rock garden at Doddington Place in Kent, Amicia Oldfield and head gardener, Lucy Adams, are planting conifers like small bristling mats and others like spiky blobs, as small punctuation points among the mixed planting and ragstone.

At Great Dixter, the pinus mugo in the Long Border was much written about by Christopher Lloyd for its anchoring evergreen properties. Fergus Garrett is promising to take this a step further with “A Conifer Experience”. See the latest post from The Middle-sized Garden. 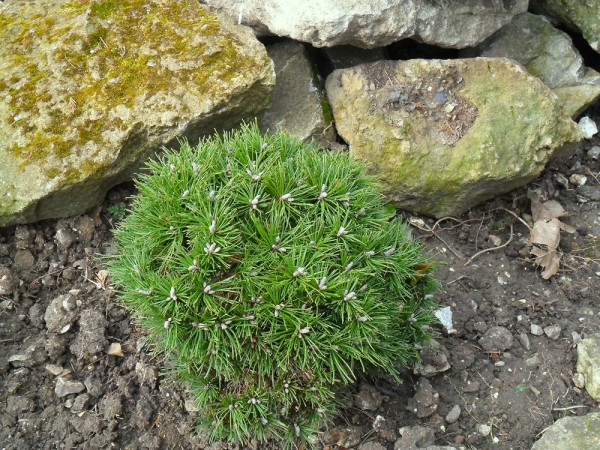 If you have a conifer in your garden that you consider horribly dated, consider possible planting companions before you take it out. Conifers provide year round colour and form. That’s not to be sniffed at. The blue-green of Juniper Communis ‘Skyrocket’ can provide a stunning backdrop for orange roses. Look at using conifers as a support for gently climbing plants such as the deep red Tropaeolum speciosum or late-flowering clematis. Contrast solid conifers with grasses. Or you may have a beautiful frondy and ethereal, pale bluey-grey pinus wallichiana, also to be found at Doddington Place. 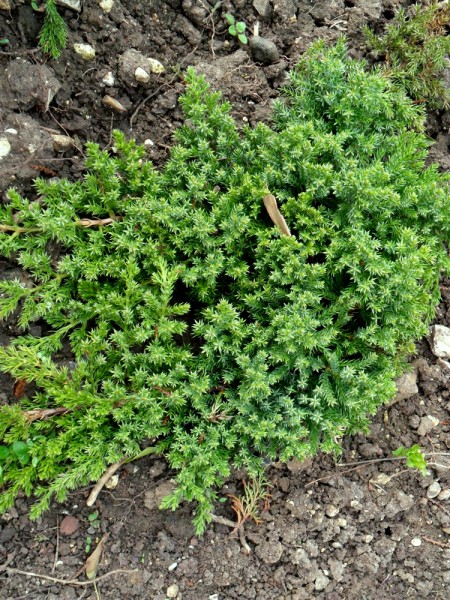 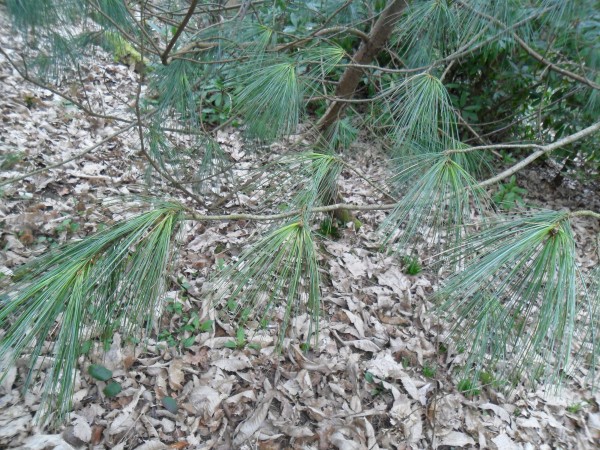 If you are planting a conifer, make sure you research your choice well. Conifers have a way of looking terribly grown-up when small but can grow very tall and wide. Few will keep their looks after hard pruning.

For the garden renovator, these survivors are not to be sneered at. With a little attention to pruning methods and thoughtful planting plans, they can be beautiful and useful. 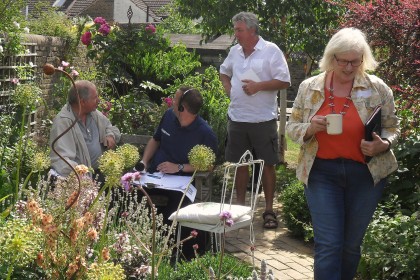 Last Sunday, I opened my garden, with thirty-two other gardens nearby, for Faversham Open Gardens. Andy Garland and Steve… 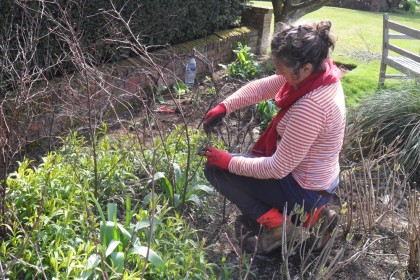 Imagine the satisfyingly stiff green shoots in your garden, which you are gloating over now, in a few months. Will… 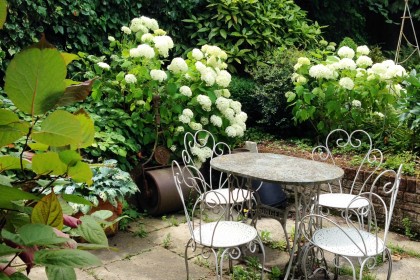 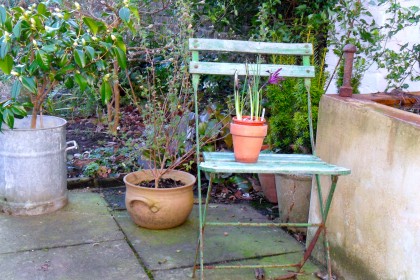 A View from the Kitchen